Hedgerows for the Future

Last month Roots for the Future concluded six more planting sessions at Charterhouse school. This was the third year in a row we have partnered with the school to engage Year 9 in planting trees on the school grounds. 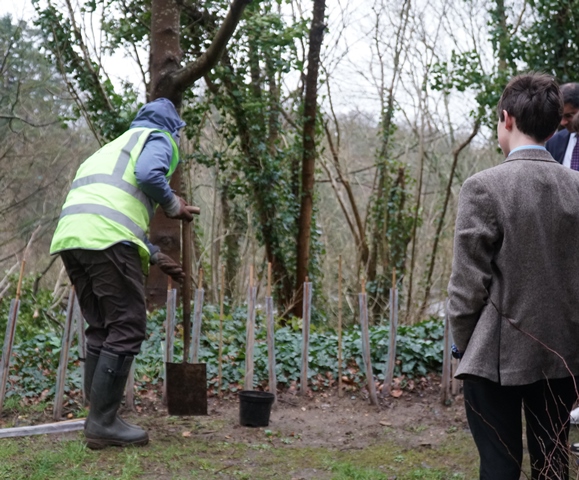 Luckily we managed to complete the project before schools were directed to close by the government a result of the of the COVID-19 situation.

Charterhouse considers their Community & Partnerships Programme a key element of its communal life. The school was founded by a philanthropist who gave it the motto ‘God having given, I gave’. So a sense of service and charity is at the heart of Charterhouse’s ethos.

As part of the wider community in Godalming, pupils and teachers are engaged in local civil society in a variety of ways, such as through volunteering opportunities working in charity shops, or giving time to local organisations. We are proud that Charterhouse’s work with Roots for the Future is becoming an annual event.

This year we planted a new hedgerow at the back of the music rooms on campus. The boys had the opportunity to plant least one tree sapling each to make up the hornbeam hedge. This hedge will provide not only wildlife, such as birds, voles and hedgehogs, with a home, but it will also play a key role in confronting some of the effects of the climate emergency.

Hedges are essentially long rows of trees so, once established, they will provide the climate with the same benefits as trees do.

With our winters getting milder and wetter, the fact that trees absorb 70 times more water under their roots than under grass means that the hedge will capture much of the run off from the schools roads and pathways. Given there is a steep bank next to the hedge leading down to flats below (where I understand a proportion of the school’s teachers live) the hedge will play a vital role in preventing soil erosion and potentially a mudslide. 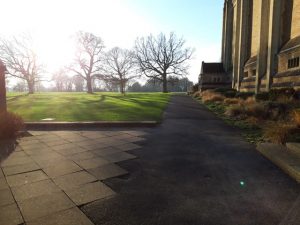 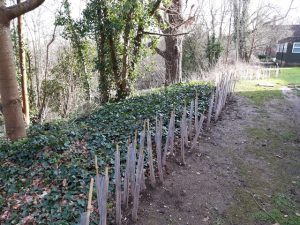 And if that sounds on the dramatic side, while we were planting the hedge, the saplings and their 13 and 14 year old planters endured no less than three pretty serious storms. 2020 started off with storm Brendan in early January, leading to storm Ciara in early February, and worst of all storm Dennis in mid-February which caused widespread flooding across the country, in the county and in Godalming itself. The young hedge weathered them all.

It’s fairly widely accepted that these weather extremes are going to become the norm, but the good news is there is much we can do to help mitigate and adapt to climate change. Planting trees is a simple, effective and fun way to do this. 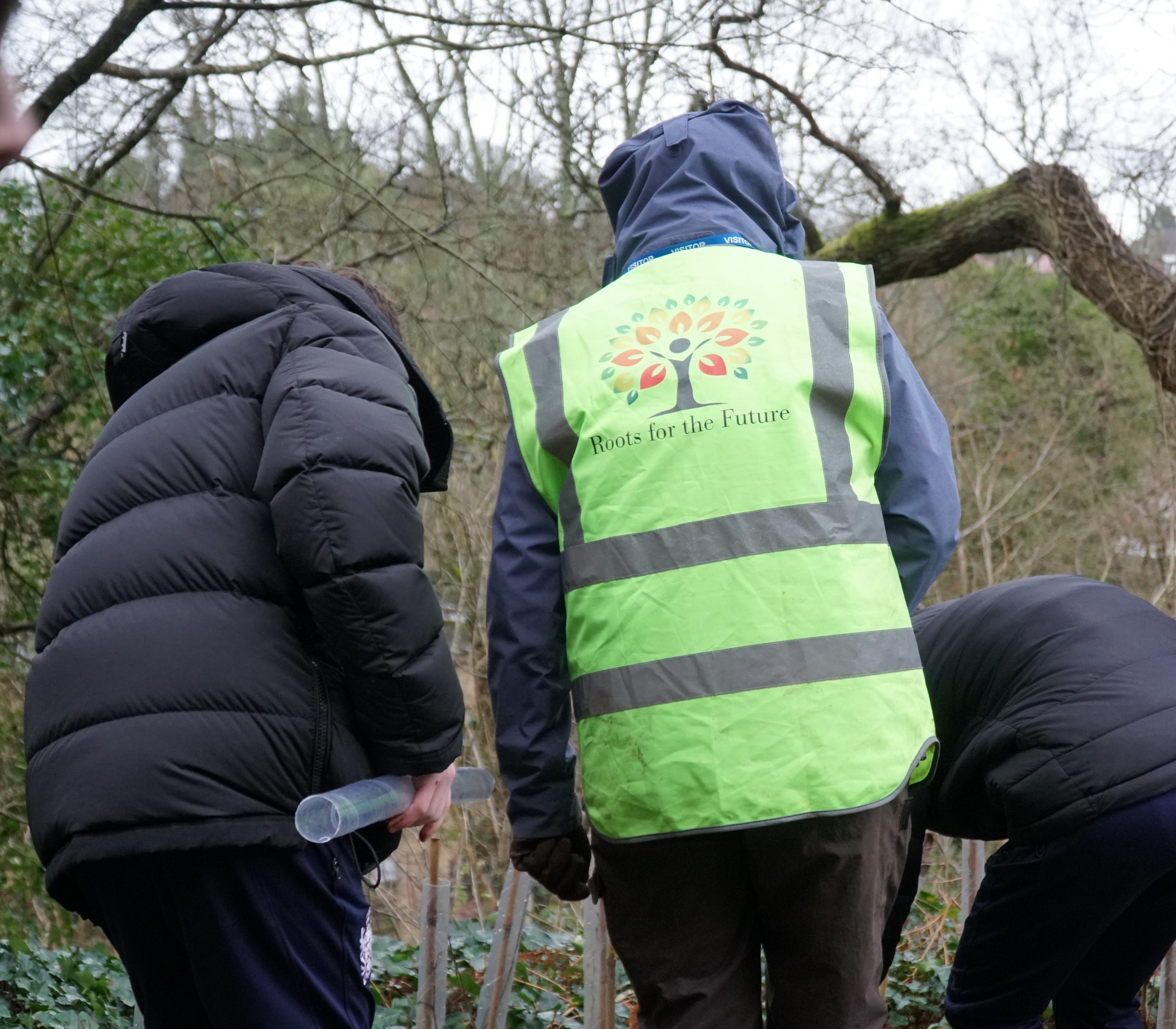 With the country in lockdown, and many of our pleasures temporarily on hold, being outside planting trees in large groups feels like a distant memory. I am sure once we start to do enjoy our freedoms again, being outdoors with friends, doing something amazing for the planet, will be even more memorable.

Roots for the FutureApril 22, 2022 at 9:36am
Today is Earth Day. It is also Roots for the Future's birthday. Six years ago, a group of us got together with some children and planted 50 trees as a pilot workshop. We all felt amazing afterwards. We'd spent a wonderful afternoon in a beautiful setting doing something positive in the fight against climate change.

Six years later, we are still going. We're perhaps not as developed as an organisation as we envisioned in 2016, but throw in a global pandemic and some huge life changes for the directors, life has put us where we are today. And we are incredibly proud of what we have done and continue to do.

The theme of this year's Earth Day is INVEST in our planet:
"This is the moment to change it all — the business climate, the political climate, and how we take action on climate. Now is the time for the unstoppable courage to preserve and protect our health, our families, our livelihoods… together, we must Invest In Our Planet."

Oh, and Happy Birthday Roots for the Future x

Roots for the FutureApril 13, 2022 at 11:07am
Thanks so much for coming out to our pub quiz at the The Star, Godalming,Surrey. UK on Sunday. Thanks to a full house and the generosity of local businesses, we made £434! This will really help us to continue planting trees in your community next season.

Thank you to
Yard Market Junipalooza HIGH PSI Pressure washing I made this - Crafts Arty Crafty, Godalming Autonomy Tattoo Multi-Store Self Storage Natter Cafe Polly Made Me Jeni Goddard and Nicki Cashmore for all the brilliant prizes.

Thanks to The Star, Godalming,Surrey. UK for having us (and donating a prize too) and to Blair for hosting. It was such a fun night!
'
View on Facebook

Roots for the Future · June 24, 2022 at 6:25am
@rootsforfuture
Delighted to deliver a new #communitygarden project in #Godalming with @WaverleyBC @godalmingtc & COPSE. Eashing Cemetery Community Garden & Orchard brings people together in #Godalming to enjoy and enhance their local #greenspace
https://t.co/Mxeq5sZ52p #SaveSoil #Biodiversity
View on Twitter
1
1

Roots for the Future · November 15, 2021 at 12:53pm
@rootsforfuture
We planted 50 saplings with Hale School in Farnham while dignitaries from around the world were negotiating how to cut carbon emissions and limit global warming to 1.5C above pre-industrial levels at #COP26
https://t.co/eeqfWAwmCT
View on Twitter
0
0

Roots for the Future · November 14, 2021 at 11:24am
@rootsforfuture
If the organisers of Glasgow's #COP26 want to offset the actual event, we're always open to new partnerships for our tree planting projects
https://t.co/ZldS3Ublx6
View on Twitter
1
1

Roots for the Future · November 12, 2021 at 6:12am
@rootsforfuture
We planted a sweet smelling Katsura tree with Godalming Councillors Shirley Faraday and Michael Steel, and Dr David Faraday, Trustee and Chair of What Next? to mark the closing days of #COP26 and celebrating the newly established What Next? Climate Emergency Centre for #Waverley https://t.co/FSpdIVMX8q
View on Twitter

Roots for the Future · November 11, 2021 at 8:12am
@rootsforfuture
Yesterday we planted 50 tree saplings in little nature clumps with @HaleFarnham's year 4, the UK's future climate warriors.
Plus it was plastic free planting!
#treeplanting
#outdoorlearning
#eyesoncop26 https://t.co/waE2TY3Otg
View on Twitter